Robolit served as a test method developer partner in the Standard Test Methods for Response Robots project for four consecutive years from 2011-2015. In the course of our work we span out a regional test facility in Alanya, Turkey and conducted several rapid prototyping events (one in Turkey and two in Australia). Our partnership still continues on a strategic level in the context of RoboCup Rescue League and other first responder training and testing events. 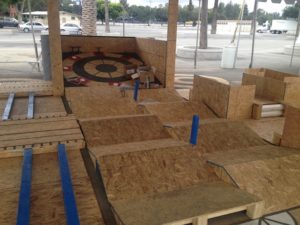 An expansive set of test methods capturing a wide range of performance metrics have been devised. In this picture some of the mobility and manipulation tests are shown in a composite test track.

In this work we were specifically tasked with the development of manipulation and directed perception tests. Though, our team assisted the larger group in the development and construction of a wide range of test apparatus as well as manage associated events such as RoboCup Rescue League and DARPA Robotics Challenge (DRC). We also developed the initial structure of an iconography to be employed in describing robotic systems. 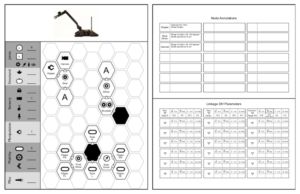 An illustrative example of the use of robotic system description iconography developed by Robolit. The goal of this methodology is to codify the design and configuration of a system at the time of testing. In the long term we expect that the availability of system descriptions and their performance metrics will give rise to recommendations to guide design effort.

Managed by the Intelligent Systems Division at the National Institute for Standards and Technology (NIST) the project aims to establish a rich set of canonical test methods to evaluate mission specific performance of robotic systems. The long term goal is to construct a central database of robot performance metrics that can be queried by procurement personnel in the course of their robot selection process. By this process the project aims to lay out a greatly democratized ecosystem that enables new and better technologies to reach the front line personnel such as first responders and soldiers. 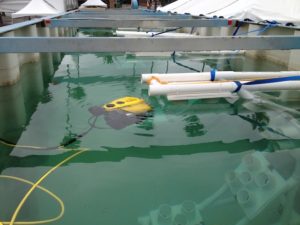 Tests under development are not limited to terrestrial systems. Both aquatic and aerial systems are also captured by this work. In this picture an ROV is performing a directed perception task under constant current.