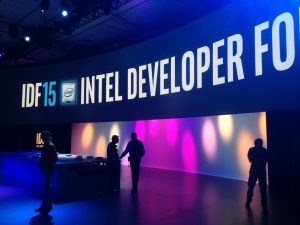 Every year Intel, Inc. gathers technologists all around the world in two events to present their vision for the upcoming year and associated product lines. In 2015, Intel announced that the future is in Internet of Things (IoT) and presented a collection of powerful solutions that would help engineers to create the next Earth shattering applications. The three main products were the Edison, Galileo and the RealSense.

In 2015, Robolit was invited as a technology consultant as part of the design team that produced the live technology show presented by the Intel CEO Brian Krzanich at the San Fransisco IDF 2015.

To demonstrate the power of the Edison Computer-on-Module devices a family of small form factor hexapedal robots were built by the Intel research team. Our task in the show was to make a large swarm of these robots to perform a synchronized dance routine. Our design was based on a distributed network of agents each performing a series of footwork as synchronized by a centrally broadcasted commands.

In addition to these small hexapods a larger machine with a unique sliding locomotion mode was also featured in the show. Designed by Nick Donaldson, and aptly named Marauder, this beast of a machine led the dance routine. Robolit designed the light effects along the legs of the machine. Constructed as independent members of the robot network in the show each lighting system on the legs was an embedded Edison based system whose display was synchronized with the overarching dance routine.